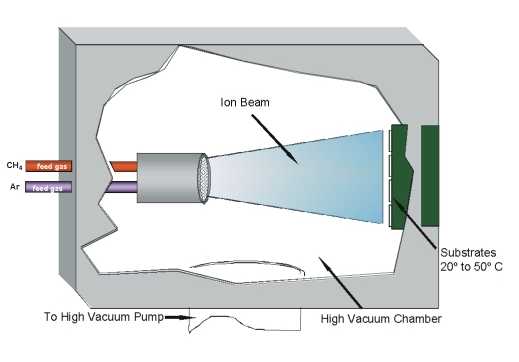 Direct ion beam deposition (DIBD) uses a broad beam ion source to direct an energetic, chemically active vapor flux for deposition on a substrate (typically mounted to a rotating fixture). The ion sources employed are both “gridded” ion sources of the Kaufman type and “gridless” ion sources of the end-Hall type. Typically, the ion beam is neutralized with an independent electron source, and the desired film is either DLC (with a hydrocarbon precursor) or SiO2 (with a siloxane precursor).

The goal is to carefully control the physical and optical properties on the films. DIBD allows fine control of these properties by permitting large adjustability in the incident plume chemistry and energy, which fundamentally impacts the structure and properties of the growing film.