4Wave staff have designed more than 100 ion beam deposition systems, mostly as part of their prior employment with Commonwealth Scientific Corporation or Veeco Instruments. This equipment has been installed worldwide in applications ranging from university R&D to large-scale device production. Ion beam deposition is used broadly in R&D, the data storage industry, and the optical components industry.

Ion Beam Sputtering (IBS) uses an energetic, broad beam ion source carefully focused on a grounded metallic or dielectric sputtering target. Material sputtered from the target deposits on a nearby substrate to create a film. Most applications also use a second ion source — ion assist source, or IAD — directed at the substrate to deliver energetic noble or reactive ions at the surface of the growing film. IAD is particularly desirable when growing metal oxide and metal nitride films as it improves the stability, density, dielectric and optical properties of the films. The ion sources are “gridded” ion sources of the Kaufman type and are typically neutralized with an independent electron source. Many applications use an assembly of multiple targets that can be indexed into position to create multilayer thin film devices. 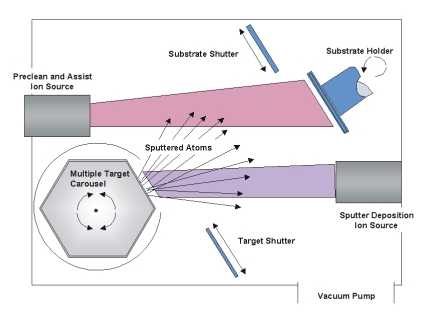 IBS processing yields excellent control and repeatability of film thickness and properties. Process pressures in IBS systems are ~10-4 Torr. Hence, there is very little scattering of either ions delivered by the ion sources or material sputtered from the target of the surface. Compared to sputter deposition using magnetron or diode systems, sputter deposition by IBS is highly directional and more energetic. In combination with a substrate fixture that rotates and changes angle, IBS systems deliver a broad range of control over sidewall coatings, trench filling and liftoff profiles.